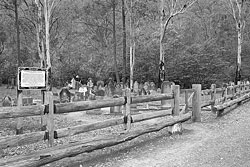 Shortly after the first fleet arrived in Port Jackson in January 1788, Governor Phillip began searching for fertile land to enable the new colony to become self sufficient. Exploring north he discovered the river which the Aborigines called Deerubbin and re-named it Hawkesbury after Baron Hawkesbury, President of the Board of Trade.

The land around Wisemans Ferry and the Macdonald Valley was settled mainly by emancipated convicts well before the first land grants in 1810. The colony flourished and by the 1840's the population peaked at approximately 1,200. Initially, maize, wheat and beef cattle were raised there. The cattle were driven to the " Bullocks Wharf " at St Albans and transported by boat to Wisemans Ferry where they swam across the river and were driven to Parramatta or Windsor. 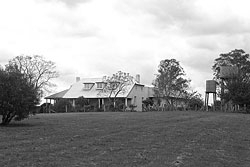 Once it was decided that the Hunter Valley be opened to settlement, rather than remain an isolated penal outpost, the need for an overland route became apparent. In 1825 the route for the Great North Road between Castle Hill and Wollombi was surveyed and construction work started the following year. Up to 500 convicts, most in leg-irons, toiled to clear a track and build stone walls, bridges and culverts to construct the road. As you descend into Wisemans Ferry from the south, the convict-built stone walls and culverts can be seen supporting the road. On the northern side of the Hawkesbury across from Wisemans Ferry one of the most remarkable and important engineering feats is preserved in the Dharug National Park . This section of the Great North Road is known as Devines Hill and the massive stone walls and ramparts are a must for all visitors to the area. Much work has been done in recent years to protect the Great North Road and more details can be found at http://greatnorthroad.com.au/

Soloman Wiseman, charged in London for theft, was sentenced to death but his sentence was commuted to transportation and he duly arrived in Sydney on 20 August 1806. An astute businessman, Wiseman obtained 80 hectares of land in the Hawkesbury in 1817 and by 1819 had established an inn at Wisemans Ferry called The Sign of the Packet. This was destroyed by floods and he built another on higher ground called Cobham Hall. It survives to this day and is now part of the Wisemans Ferry Inn. Wiseman continued to acquire land along the Hawkesbury where a river crossing was feasible on the basis that a road would be built to link to the Hunter Valley. 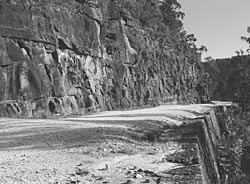 livestock across the river. When work on the Great North road started, he obtained the contract, worth $6,000 a year, to feed the convict labour. In 1832 the government acquired the ferry lease by claiming the crossing was essentially part of the main road. The ferry is now run by the RTA and operates free of charge, 365 days a year.

The village of St Albans lies about 20km north of Wisemans Ferry at the head of the McDonald Valley (or the Forgotten Valley as it is now often called). On route to the Hunter in the early 1800's, there was need for numerous inns to provide a service to travellers and settlers. Now called the Settlers Arms the two storied, sandstone inn was built near the "Bullocks Wharf" in 1836 and continues the tradition of service to this day.

The above is but a taste of the history that abounds in the area around Wisemans Ferry. Come and explore for yourself - there is so much to see. 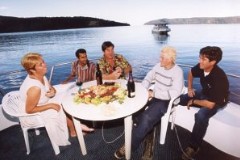 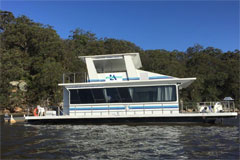