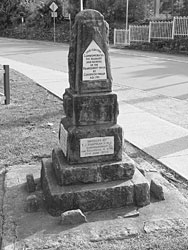 There would be few people to doubt that the magnificent Hawkesbury River is Australia’s premier waterway. It’s history and beauty have been written about many times over, from the days not long after Governor Phillip first explored its length in 1789.

The port of Brooklyn is always busy with ferry traffic, trawlers and pleasure craft. It became important when the Union Bridge Company of Brooklyn New York completed the first railway bridge across the river in 1889. Prior to that, passengers were met at Long Island by the steamer “General Gordon” and were transferred to Mullet Creek station by boat, very near to the site of the present Wondabyne station. As you pass under the present railway bridge, you will see the sandstone piers of that old bridge, that was replaced in 1946.

Each weekday the Riverboat Postman carries tourists, mail and supplies to isolated communities upstream from Brooklyn, a reminder of pioneering times when the river was the only highway linking families scattered along the banks from the ocean to Windsor.

Fishing and oyster farming are still major commercial activities, and large quantities of oysters are sent daily to the Sydney Market. The early river settlers did not value the delicate river oysters, and millions were burned for lime until this practice was banned by the government in 1868.

Dangar Island sits in the estuary overlooking Brooklyn and has many historical associations. Governor Phillip’s party camped there in 1788 and named it Mullet island because of the large numbers of fish taken. Henry Dangar built a house there in about 1871, and constructed a stone tower which can still be seen on the hill, a short walk from the public wharf. The island was leased to the railway contractors and large sections of track were built there and towed into position by boats. There are roads on Dangar but they are mown lawns and cars are prohibited. Several artists and writers make their home on the island.

The lower reaches of the River are mainly valleys drowned at the end of the last Ice Age. These are now picturesque fjords of deep water, with steep sides covered in thick bushland. When Governor Phillip explored Cowan Creek by small boat in 1788, he found “several coves of good depth of water all the way up”. He reached Bobbin Head before turning back.

Refuge Bay is a sheltered anchorage at the entrance to Cowan Creek, and a popular haven for cruising boats. It is not uncommon to see foreign yachts taking refuge here as their first landfall in Australia. It was from here that the “KRAIT” began her journey to raid Singapore Harbour in 1943. 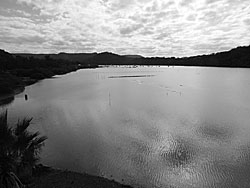 In 1889 it was suggested that land between Smiths Creek and Cowan Creek become the site of “PACIFICA” a proposed capital of the new Commonwealth of Australia. Buildings were to have replicated Windsor Castle, the Tower of London and the Houses of Parliament, with a grand entrance across a suspension bridge near Bobbin Head. The plan, thankfully, came to nothing and we were spared “Canberra on the Hawkesbury”.

Two bridges now span the river at Kangaroo Point carrying traffic on the Pacific Highway and the Newcastle F3 Freeway. It was here that George Peat established the first ferry service for travelers in 1840. Motorists now cross the bridge in a few seconds whereas Peat took all day to take 34 horses across the river in 1852.

Milson Island was bought by the government in 1901 and used as an asylum and then as a prison. It is now a recreation centre. On the northern shore opposite the island lies the wreck of the HMAS Parramatta, the first warship of the Australian Navy. In service from 1911 to 1928 she later carried construction materials for buildings on the island. A gale drove her ashore to where she now lies rusting in the mud.

Berowra Waters was established in 1902 when a track was built down to the river from the railway at Berowra Village. Enterprising locals began conveying people down to the creek, and it soon became popular as a holiday destination. By 1914 there was a kiosk, 2 boatsheds and houseboats for rent. In the depression years many people lived in the area in caves and shacks. Fishing, oysters and home grown vegetables were a great help through this time.

Bar Island near the mouth of Berowra Creek is one of the romantic and historical landmarks. In 1876 John Crumpton built a church on the tiny island. Some of the early pioneers are laid to rest in the cemetery there. Among them is James Milson after whom Milson Island was named. Although the church has long since disappeared, annual pilgrimages are made to the island and a memorial service is still held.