Follow the Bells Line of Road to Mount Tomah, the breathtaking cold climate Botanic Gardens, home to the only 'Wollemi Pine' on public display.

This 252 hectare garden sits on the summit of a basalt capped peak 1,000 metres above sea level in the World Heritage listed Greater Blue Mountains. Mount Tomah has over 40,000 plants from remote corners of the world. 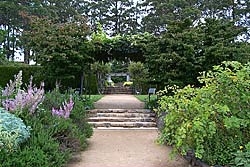 The Darug Aboriginal people were the original owners of the land. 'Tomah' is reputedly an Aboriginal word meaning 'tree fern'. In 1804, naturalist and explorer George Caley became the first European to visit Fern Tree Hill, now known as Mount Tomah. Since 1993, the Blue Mountains Botanic Garden, Mount Tomah has included 186 hectares of sandstone woodland and gullies to be maintained as a conservation area.

While the Mountains were crossed by the famous explorers Blaxland, Wentworth and Lawson in 1813, in 1804 another explorer George Caley set out via a different route. George Caley was a plant collector who reached a location in the Blue Mountains which he named ‘Fern Tree Hill’. This point was later named the township ‘Mount Tomah’.